Swimming to a Better G.P.A. 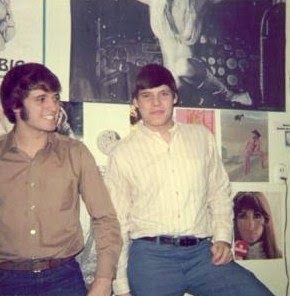 
Swimming to a Better G.P.A.
When you're eighteen, know everything, listen to no one, and have twelve weeks of college under your belt, you are invincible. The only personal characteristic larger than your ego is the massive chip you wear on your shoulder.

In the fall of 1970 my Old Main roommate, Jim Refi and I fell into this category. We thought we had the world by the tail and we had the 2.0 and 1.7 grade-point averages to back it up.

The SHIP (one of PA's state colleges) had not yet converted to the semester plan. We were still operating under the trimester system where the first term ended with Thanksgiving vacation. With a break for Christmas, the second term ran for twelve weeks through the winter. Although the grading period flew by, keep in mind the classes were one hour, 15 minutes long, and met two or three times per week, depending on the credit hours given for each course.

We had endured our first self-scheduling debacle a few weeks prior and soon found ourselves taking Beginning Swimming 101, with Don Miller providing the instruction. He also served as the SHIP's swimming coach (and assistant football coach) at the time. The class met twice per week, at 8:00 AM in the old Henderson Gymnasium.

I might add that Coach Miller took his physical education classes very seriously and that this was a typical Central Pennsylvania (pre Al Gore and pre Global Warming) winter.

A few upper-classmen tried to warn us about this class and the time that it met, but we already knew it all. And besides, we had a plan. We intended to swim our way to beefing up our GPA's.

As expected, during our first session, Coach Miller explained to us that we would all be given a rather rigorous swimming test the next time we met. If we passed that test, we could be exempt from the class, and still receive a passing grade that would neither help nor harm our precious GPA's.

It was also explained to us that those who did not pass the test, would be graded on their improvement, rather than on their skill as a swimmer. So, to not fully try on the test, show improvement, and then ace the one-credit course to advance our averages, became our primary objective.

Sure, many other students advised us about choosing this option, but once again, we were omniscient, stubborn and intent on carrying our plan through to fruition.

We could barely contain our laughter as Coach Miller later read off the names of those that succeeded in passing the test. Naturally we were worried that maybe we mistakenly demonstrated signs that we were good swimmers. Had we faked it well enough to fool the instructor? Were we credible in our attempt to show him that we really could not swim?

Great news - we were not on the list. We were absolute in our resolve to not glance at each other across the pool as the next list was read aloud.

"The following students will have to continue to take this class as prescribed," explained Miller. Imagine our shock, when we weren't included on that list either.

Those that passed and were exempt, were dismissed to return to their dorms and go back to sleep. Those that had to take the course for a grade went to the deep end of the pool to begin class. Jim and I were left there in the shallow end, when Miller announced, "And Potchak and Refi will stay here with our grad assistant/life guard for remedial swimming."

He turned and walked away to begin class with those students that he still respected.

When our co-ed life guard sat with us on the top pool step, and told us to put our "faces gently into the water," and that we were going to "practice blowing bubbles," we knew we were in deep, hostile waters. The only thing shallow about us was our petty attempt to trick Coach Miller. Confessing to our crime was pointless.

My peroxide-bleached hair turned green that winter from the chlorine. I sported goose bumps the size of plums and should have purchased stock in VISINE. Later on, I eventually recovered from dermatitis, bronchitis and an inner- ear infection. And, we never worked so hard for anything in our lives.

Jim did not return to school after our sophomore year. That was the onset of a year-long barrage of questions about him, that always began with the words, "Hey Po, where's Ref?"

I returned to the SHIP, but had to undergo total reconstructive surgery on that inner ear, four years later.

I soon found out that we learn much more than what shows in our college transcripts, and I thank Don Miller for a valuable lesson – a lesson that had nothing to do with swimming or a grade point average.
Newer Post Older Post Home