Who Is That Old Jogger?

Who Is That Old Jogger? 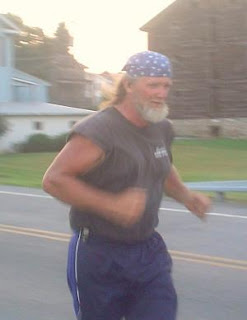 Despite driving west with the setting summer sun glaring through my filthy windshield, I was still able to make a distinction. The jogger heading toward me was no young man. His long locks and blue bandana did little to mask his gray beard, and his pace was hardly that of a young marathon runner.


Because of the heat and humidity, I couldn’t help but ask myself, “Who is this old, burned out hippie, jogging in this hot weather?”


Well before I spotted his earphones and size 13 running shoes, I become aware of his gait. It was faintly familiar to me.  It was then that I realized he was a former runner of mine when I coached high school track, so I pulled my Jeep off the road and stopped to chat.


I blushed with embarrassment, my cheeks easily outshining his, as I quickly did the math.  This old, gray, over-the-hill jogger was eight years younger than I. And when I discovered how far he had been running, I realized the distance was way greater than anything I could cover.


“Dan Conley?” I asked – hoping I wasn’t having a senior moment myself.


As we extended arms to shake sweaty hands, he replied with a grin, “Yep, that’s me.”


“I’m impressed, buddy,” I admitted.  “I surely couldn’t run like this when I was your age, especially on a day like today.”  We immediately started to recollect and exchange memories from the mid 1970’s. We also reaffirmed our beliefs that track and field and training have come a long way in recent decades. 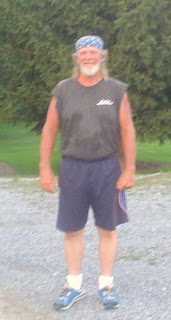 
Dan and his high school teammates not only represented a different era of time but they were also part of a unique and special breed.  There were no local “all-weather” track surfaces at that time and running shoes were a far cry from the top-notch, high-tech variety of today.  I remember ordering the cheapest white, trimmed in black, uniforms that I could find.  No logo appeared on the uniform tops or on the all-gray sweat suits.  In fact, I nicknamed our track team the “gray grub worms” because they were so drab.


The track at the time was said to be a cinder track but in reality, it was composed of gravel and the composition varied in depth and density.  The straight-aways were as hard as concrete and the turns, as deep and as soft as desert sand.  Weeds thrived too – it was more of an obstacle course than a track.


Still, perhaps because of personal determination and work ethic, those runners of that time can proudly boast of some very noteworthy performances. 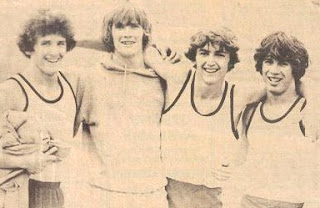 Dan was the grandfather of the foursome that held the 2-Mile Relay record for the school (Northern Bedford) at the time. Sam Evans, Marty Diehl and Steve Dodson were the underclassmen members of the quartet. Despite those deplorable training conditions, shabby uniforms and antiquated equipment, they ran a very respectable 8:26.5 (converted to metric) in 1978 and qualified for the PIAA State Championships that year.


A year later, underclassman Todd Klotz joined that relay team and a new metric system of measurement was introduced.  Along with the new classification (the 3200 Meter Relay), a new school record was set at 8:26.06 in 1979. That record still stands today, albeit barely. *** 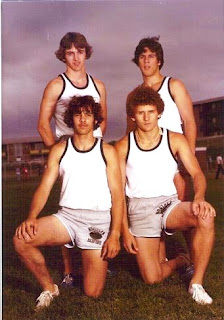 
I’ll carry those recollections and relay records with me till the day I die, but a memorable individual performance remains with me today, too. When I brought it to Dan’s attention, I wasn’t surprised that he remembered it as well as I did.


Dan was running the 2-Mile Run in a triangular meet and wasn’t having a particularly great day. It was the last meet of his senior year before districts. He was far behind the leader, possibly in fourth or fifth place with only a lap to go.

I got in his ear big time as he hit the second straight stretch on lap seven. “Is this how you want to remember your last meet, your senior year?  Suck it up and go for it!”
Like an angry bull being teased with a red cloak, he snapped out of his dismal pace and - you guessed it - he passed all the competitors on lap eight and won going away.
Too tired to comment, he just smiled as he crossed the finish line. His face spoke volumes, indicating he was elated to end his home track meet appearances on such a positive note.
After chatting for a while, I left Dan to continue his evening run. I also departed with the impression that today, Dan approaches his work, his family, his health and his training pretty much the same way he ran in 1978.  He is a competitor, plain and simple, and his attitude in life is admirable.
It was a pleasure reminiscing with him.
***Editor’s notes: According to present Northern Bedford Head Track Coach Jeff Batzel, the most recent 3200 M Relay team came very close to that old record.  The 2013 relay team posted an 8:26.20 this past spring. I wish the returnees well with their efforts to break it next year. And…
Yes, I still remember someone from those two old relay teams placing after-shave lotion or shaving foam in my jock strap during the state track meets.  I was an avid runner myself at the time, and I will always remember the burn I got from my morning run. 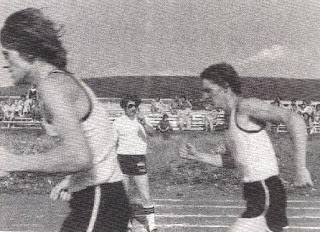 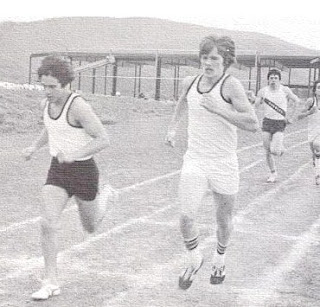 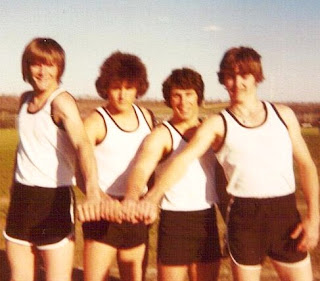