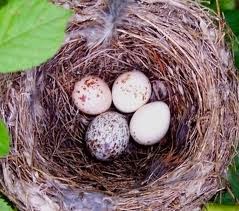 
As we unfolded our lawn chairs within the maple’s shade we startled a wren from the arborvitae close by. Without her sudden departure, her miniature nest would never have been brought to our attention. In what might be described as a remarkable role reversal, I found myself teaching the old man with me the little I knew about the large egg we spotted mixed with those of the mama wren.


I don’t know if I ever taught this old guy anything in my life, yet scores of times, I learned so much from him and his experiences.   After all, he was a member of Tom Brokaw’s “Greatest Generation,” a World War Two veteran, who built his own home and managed to complete repairs on the dwelling most of the time without help.  In my eyes, there was little he could not do.


With the assistance of his upper bifocal lenses focused on my lips and his hearing aid turned to full volume, he was locked in on my Audubon lesson like radar on a Stealth Fighter.


He was fascinated with the fact that the larger egg was the product of a female cowbird that uses other songbird nests in which to lay her eggs.  Not only will the adoptive mother incubate the odd egg, but she will relentlessly try to feed the young chick after it hatches.


While sipping from his can of beer, his aging eyes would move every so often back to the nest, where he gazed in amazement at the assortment of eggs.  I could easily see that behind those brown eyes his wheels were turning and with each rotation he became more and more intrigued.


“Will the cowbird chick take more than his share?” he asked.


“Usually,” I answered.  “In most cases the adopted nest is built by songbirds of smaller species,” I added.


Keep in mind, the old man was a product of the Great Depression and believed wholeheartedly that a hard day’s work was the only way to get anything worthwhile accomplished.  Never in his wildest dreams would he ever contemplate using another man’s toils for personal gain.


It’s not that the old man was selfish or greedy during his life.  To the contrary, he helped others willingly and often.  When he couldn’t help financially, he was quick to volunteer his time and talents.


Accompanied by another sip on this summer day, he shook his head as if to rid his brain of cobwebs.  I knew him well enough to predict his thoughts.  He was thinking that this cowbird species was lazy.  The term adaptation meant little to him and he spent only a short time dwelling on it.  Compared to the way he lived his own life, comprehending how and why any living creature would come to rely on the work of others so much was downright puzzling to him.


Growing up, the old man and his family had very few material possessions. His father was a railroad worker and his mother was a stay-at-home mom who worked the garden, gathered eggs, milked the cow and prepared every provision from scratch.  A “Google Image Search” of the words blue collar in 1925 would no doubt reveal a photo of his family. Later in life, livelihoods dependent on the mines and mills surrounding Johnstown would be the norm for the eight children as they departed from their own protective nest.


In the field of education, assessing student retention is a vital teaching tool, so I attempted to analyze the old man’s thoughts.  It was not difficult for me because I understood his life well.  Yet, I was still a tad unprepared for what was about to follow.


I asked if he wanted another beer and to no surprise he replied that he did. As I turned in the direction of the house and ambled to the kitchen refrigerator, I caught him departing from his chair too.  He hobbled slowly for a few yards from the maple tree to the cultivated field behind the house.


I lost sight of him for only a few seconds, and then we simultaneously returned to our chairs in the shade.  As I offered the cold can to his outstretched hand, I realized that our roles had reversed yet again.  He no longer was just an old man, and I was no longer the teacher in this dialogue.  He had returned to a role more familiar to me.  He was once again my dad, and I was his son.


And a quick glance to the wren nest revealed – the cowbird egg was gone. 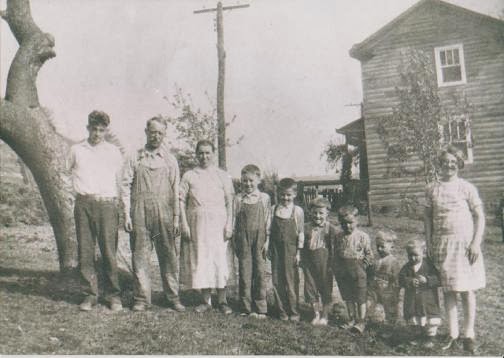