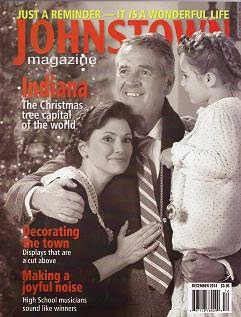 Written for the Johnstown Magazine - December, 2014

Long ago, my childhood expeditions to the downtown area of Johnstown originated in the hills of the Beaverdale-Sidman area of Cambria County.  A small caravan comprised of two or three cars was the norm because Mom and a few of her sisters and my cousins always accompanied my siblings and me on those special treks to town.

I honestly don’t remember Dad being part of our group much, if at all. Later on I realized that because these trips were primarily designed for the women to shop, Dad had little interest. Besides that, he drove into town almost daily to work at the US Steel Plant in Moxham, and probably had little desire to drive there again on a day off.

Years later I learned to appreciate just how far down downtown was.  Our home in the fifties bordered the banks of the South Fork Branch of the Little Conemaugh River – the same waterway that fed the South Fork Water Dam that led to the famous 1889 flood that virtually wiped out the city. As a kid, I paid little attention to the altitude, terrain and corridors that took us into the heart of town.  But as I grew older, the location of the city in relation to the hills surrounding it became much more apparent.  It was easy to see how and why the downtown area became known as the Flood City.

Some familiar sights still stand out in my mind today, similar to the way they did during those early trips during my youth.  I can easily recall route 53, the Liberty Park Pool, and ad signs for Mac’s Tires and the Johnstown Airport as we made our way to town.

Observing these landmarks was easy, even with the nonstop, animated conversation taking place between my mom and her sisters.

As we continued down Frankstown Hill into Johnstown, it seemed that my aunts’ lively banter became softer and more muted.  Their whispers were usually followed by giggling and quick glances to the backseat to see if the kids were listening.  I was too consumed with the excitement of getting a first glimpse of the city to pay much attention to them or what they were saying – something about some pet store owner selling kittens, I thought.  With time, I learned (through hearsay, that is) that an adult establishment known as Rachel’s (a cat house of sorts) might have been the reason for their clandestine conversation.  Regardless of their discussion, my anticipation mounted as our car made the descent further down the steep hillside.

Yes, we relished our treks to downtown Johnstown, but at no other time of the year was our exuberance more evident and vividly remembered than the trips made in the weeks preceding the Christmas holiday.  The small towns in the hills had their share of local shops, hardware stores and a “Five & Dime” or two, but they could not compete in my mind with the big department stores of the city - Glosser Brothers, Penn Traffic and Penney’s.

For me, the holiday decorations downtown were simply spectacular in comparison with those in the smaller hometown stores.  Yes, in adulthood we eventually realize that the scope of those holiday sights might have been exaggerated somewhat (similar to revisiting a dinosaur museum) because of our youth and size, but there was no denying a six-year old his version of the view in the city at Christmas.

One of our favorite locations was Central Park in the evening, with Christmas lights-a-plenty surrounding shoppers in every direction.  I could only stare in awe while holding tightly on to Mom’s hand.  And if a gentle snow began to fall, it enhanced not only the picturesque panorama downtown, but somehow magically magnified the anticipation of the season for young and old alike.  In retrospect, those lights probably weren't really all that bright or numerous but the impact they had on a kid was profound.

The crowds in the near-by stores stand out in my memories, too.  Keep in mind – very little can be seen by a child with larger and taller adults milling all around.   My knee-high black rubber boots with metal buckles were pretty much all I could see, so I felt uneasy about navigating through the multitude of grown-up shoppers.  In later years, I discovered I may also have exhibited a bit of claustrophobia at the time.  As a little tyke, I can best describe the atmosphere, close to the floor, as a mixture of pungent perfume and woolen winter coats that smelled similar to our dog, Lady, when her fur was wet.

Encompassed within the safe confines of my mom and aunts’ family circle, and with my fingers firmly fixed to their coats, we eventually made it to a clearing where I could breathe again.  A clear view of additional decorations soon had me forgetting about that momentary displeasure when I surely thought I would get lost, or worse, suffocate.

Downtown, I caught my first-ever glimpse too, of the Salvation Army volunteers with their black kettles and chiming bells.  They didn’t exist in Beaverdale, at least not to my knowledge.  And it was years later before I became aware of their actual purpose. 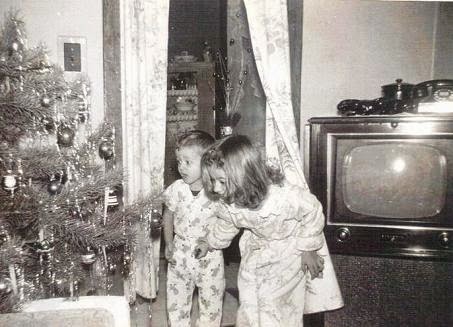 In addition to the novel sights and sounds that stimulated my senses as a kid, there were pleasant fragrances to absorb, too. Warm cashews, hot dogs, and buttered popcorn never had quite the same aromas around home as they did downtown.  And growing older failed to diminish my appreciation of those scents - particularly during the Christmas season.

To this day, I find it difficult to walk by a lightly warmed cashew display without the aroma striking a chord within my holiday memories.  And it’s impossible to continue to pass by without purchasing a half pound of the delicious delicacies.

While it’s no surprise that children might discover delight in riding a simple escalator in a downtown store, I find it odd that the feeling never seemed to wear off as an adult years afterwards.   I still look forward to taking the moving steps in stores during the holidays. Contemporary teens today would find it hard to believe that escalators were a rare find in the fifties and sixties, and might find it even harder to believe that they were as uplifting in mind as they were in body. There was something magical about ascending or descending onto another level filled with even more holiday wonders.

Artificial window snow, peppermint candy canes, and red and green cellophane-covered popcorn balls were but a few of the other eye-catchers spotted downtown.  Yes, they were also found in our hometown stores, but here, their magnitude was second to none.

As a youngster, I didn't really care much for the taste of those popcorn balls.  Frankly, they gave me an upset stomach more often than not and I was afraid I might chip a tooth while attempting to gnaw into the ball’s core. Yet, like the candy canes, I still find that we purchase them annually for our kids and grandchildren - over a half century later, but they’re still irresistible.

Even something as simple as listening to Christmas carols while shopping was special downtown.  The local hometown stores were not equipped with phonographs or any other devices suitable for playing recorded music.  But the technology downtown seemed far superior, and today the sound of carols will often take me back to the holiday sounds of the city.

Let’s not forget to return

Unfortunately, memories are not always pleasant – whether they’re recollections dealing with Christmas, our childhood, our hometown or a near-by city.  Each of us will experience some negative memories from time to time.  And during the holidays, those can be more numerous than at any other time of the year.

If you find that you’re sometimes feeling down, and traditional Christmas carols just can’t seem to bring you back on the right track, feel free to evoke a different song from the mid-sixties containing this advice:

Yes, regardless of your location, you can indeed go downtown again.  If you can’t make the actual physical trip into the city, please consider taking a mental journey back in time.  At the very least, you just might find the connection between past Christmases and Downtown Johnstown to be a positive and ‘escalating’ experience.

Merry Christmas, everyone, and best wishes for a Happy Holiday Season.