Written as a "letter to the editor" - Bedford Gazette, Altoona Mirror and Morrison's Cove Herald 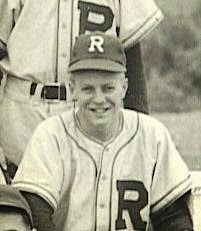 Eddie King’s recent passing will leave a huge void in the lives of all who knew him.  Coach King will no doubt be remembered as a great baseball coach and teacher in the NB School District. But Eddie was more than just a baseball coach and enthusiast. He was an awesome neighbor, friend, husband (to his wife Grace), father (to his daughter Katrina) and one of the nicest men to have walked the earth.

He may have rounded the bases and crossed home plate for the last time, but his entire life was a grand slam.  He’s no doubt celebrating now in the divine dugout with many other boys of summer.
Rarely losing his temper - forever smiling - Eddie was a first-class act all the way. I don’t think many of us could say they ever heard him use foul or harsh language at any time. Always under control, swearing never entered the man’s mind.

I recall vividly the times that Eddie had trouble opening his milk carton at lunch time in the high school cafeteria.  His companions waited like vultures to watch him struggle, because Eddie’s carton always seemed to have extra glue on the spout.

We knew that after the initial attempt, Eddie would resort to prying it open with a knife or fork.  With a dozen eyes on him, the poor guy only got more frustrated and clumsy.  About once a week, he’d spill the milk, usually on his shirt or tie or pants.

We all knew what was about to follow. “Garsh Darn It!” exclaimed Eddie.  Sure, we knew that very same expletive was coming, but we roared with laughter each time nevertheless.  It was just one example of the many ways Eddie handled difficult situations with class.

A tip of the baseball cap to you, my friend and colleague – you have no idea how much you’ll be missed.

Some of you may not know, but Eddie was born with a hole in his heart. He dealt with numerous medical tests, procedures and medications his entire life.  Unfortunately, part of Eddie’s legacy will be the even larger hole he’s left in the hearts of those he’s left behind. 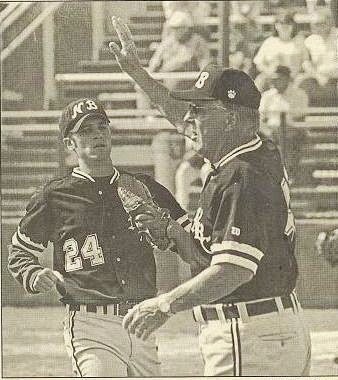 Coach King bringing his team together between innings - PIAA playoffs in DuBois, PA - May, 2000