The Zenith of My Childhood

As I reflect on my childhood memories, the Sundays of my youth stand out in particular.  Of course, there was the obvious pleasure of not having to attend school on those mornings.  But, those days were special for a number of other reasons, too.

Regrettably, the two-hour Byzantine Mass at St. Mary’s in Beaverdale, Pennsylvania was not one of the contributing causes of my enthusiasm. Actually, I could drift off in thought easily during those services because there was so much repetition in the rituals, I always knew that I could catch up again in a matter of minutes.

No, this Sunday anticipation and eagerness had nothing to do with religion – it was based entirely on visiting my Aunt Ann and Uncle George each Sunday morning after Mass.

Their home, heated with coal and wood like most others in the area at that time, was more than comfortable; it was cozy.  I couldn’t wait to get out of the car on cold winter days and get in there and get comfy. It was so warm, in fact, that Uncle George left the large wooden door open and only the glass storm door remained closed, allowing extra light to enter the kitchen.  It couldn’t have been more inviting for family to visit.

Aunt Ann’s homemade buns, right out of the oven and buttered lightly on top, were impossible to resist. Her poppy seed and nut rolls, usually made the day before, were unmatched in West Central Pennsylvania.  As we enjoyed those treats, the grown-ups sipped coffee and tea or downed a shot of liquor while we kids were permitted a fairly rare soda.

Even with all these sights, smells, and tastes assailing my senses, I somehow kept my attention on (and made a beeline for) their radio. To me, in the 50s and 60s, it was already an antique.  It was a Zenith model, about the size of a large dog house, and the top served as a display shelf for some of Aunt Ann’s knickknacks and photos.

After the three-hour run of Polka programs concluded for the day, I was granted total permission to use it as I pleased. My older sister exhibited little interest and my younger siblings weren’t old enough to appreciate the radio’s capabilities.

A clockwise turn of the black knob, which was about the size of a silver dollar, on the face of the radio was the customary way to turn it on back in those days.  I could easily see into the back of the apparatus where giant tubes, the size of garden cucumbers, would gradually get brighter and more vivid.  Impatiently, I had to wait the minute or two (which seemed much longer) for the mammoth machine to warm up. 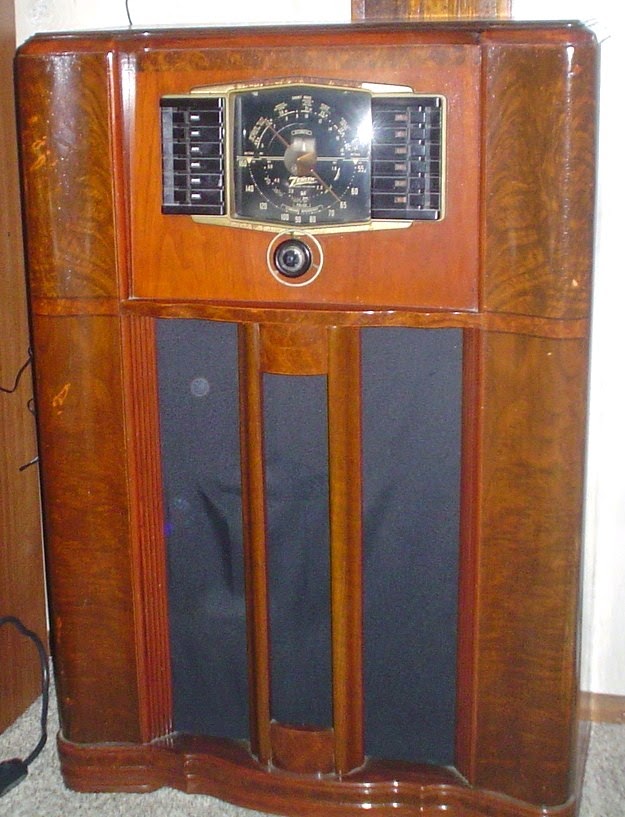 The Zenith, as it is today

The radio contained bands that received not only the familiar AM and FM stations, but also had the capability of receiving short-wave broadcasts, ships at sea, distress signals, and numerous overseas stations with people speaking in foreign languages.  Beeps and Morse Code-like dots and dashes were not unusual, either.  At night, Uncle George explained that the reception at times was even better than during the day.  I loved that radio…

So much so, that as a teen, I mustered up some uncommon confidence and informed my aunt and uncle that I’d like to have that radio someday.  They nodded in approval, but never formally announced that my wish would actually be granted.

Later, my aunt and uncle retired and built a new home just a block away in town. Imagine my surprise when I learned that the Zenith wasn’t making the move. I don’t know if Aunt Ann felt that it didn’t fit properly into her new decor or if she just thought they didn’t have room for it. Either way, I was ecstatic to discover that they were giving it to me.  That radio has been a part of my home since the day I received it. It still works well and is well taken care of, too.

Both Aunt Ann and Uncle George have since passed away. Their daughter, Alice (Wodoslawsky) of Portage, Pennsylvania, has also passed.  Their son, George (Sonny) Jr. of Mechanicsburg, Pennsylvania, is aware that I have the radio and I thank him for allowing me to keep it as a memento.

Perhaps you might have an old radio whose presence in your home evokes fond recollections of days gone by.  If so, your radio just might be a Zenith in your childhood memories, too.
Newer Post Older Post Home