Susie and I dated through our entire senior year in high school and for most of my first year in college, too. In the summer of 1971, we called it quits and attempted to move on with our lives. Our break-up was mutual, cordial, and without malice; so I've been baffled for over 44 years as to why I behaved as I did following our split.

When my first cousin, Marsha Hoyer, who was a year younger than I (and absolutely gorgeous I might add), visited with her family that summer, I came up with the deviously clever idea of taking her for a ride on the rear of my Suzuki motorcycle. I wore down a set of tires traveling up and down Cameron Avenue in the nearby town of Beaverdale with Marsha's arms wrapped around my waist. Of course, her long blond hair blowing in the wind beneath her helmet did little to conceal her gender, and the trips just so happened to be in the area of town where Susie resided.

To this day, I have no idea if Susie ever saw any of my drive-bys with Marsha, my fake date, on that bike. I'm sure my behavior continued for a number of days, too, since Marsha and her family stayed for a week or longer when they visited.  One might think I got the drive-by desire out of my system with all of those repetitions – but one would be totally wrong.  Developing schemes to make Susie jealous was foremost in importance for me.  Yes, pretty mature, huh?

Enlisting the aid of friends
A very good friend of mine, Rich Fornadel, lived next door to Susie on Cameron Avenue. Rich and I worked at the same place during the summers and we also rode our bikes together often during our free time.  And.... it just so happened that another family, the Popoviches (friends of the Fornadels), had returned to Beaverdale to visit their relatives, too.


It wasn't long before Rich and I were chauffeuring Debbie Popovich and her sister Sandy around the area on the rear seats of our cycles.  It should be noted too, that both Debbie and her sister would be considered, without a doubt, as double blond bombshells in their day.  Two aunts, two uncles, and a cousin of mine spotted me riding around town with Debbie – but honestly, again, I don't know if Susie ever saw us.

Did this additional behavior bring a halt to my drive-by obsession?  Did I get it out of my system once and for all?  Of course not - but the next cycle of events would terminate them forever.

As fate would have it, I spotted Susie getting out of a car one evening as I made yet another trip to Beaverdale. This time, I was riding alone.  Opening the car door for her and accompanying her up the steps to her porch was her date.  Can you believe it?  This gal had the gall to actually go out with another guy!

Whipping around the block to make another approach, I caught this culprit kissing her goodbye while standing behind the railing on her front porch.  I stopped dead in the street just as they both looked down at me on my bike.

A sudden and unexpected fit of jealousy now besieged me.  The green-eyed monster rapidly erupted within and immediately took control of my entire mind and body.

Taking a page from Neil Armstrong’s moonwalk two summers earlier, I too accomplished something earth-shattering. Where Armstrong took one small step onto the moon, I took one small step down on my gear shift and popped one giant wheelie for mankind. Yes, I exemplified to the world what a mature man is willing to go through as he attempts to rekindle a spark of jealousy in his former girlfriend.

Backfire
I knew I was in real trouble when I found myself no longer on my bike's seat. With torn jeans, dented gas tank, broken mirror, demolished turn signal, and smashed brake lights, I looked down the road as my bike lay still and quiet about 15 yards ahead of me right there on Cameron Avenue.

I could not look up toward the porch. But one thing for certain, Susie did indeed see this drive-by.  There was no doubt.

Never revealing the tiniest inkling of being hurt, I somehow ambled that 15 yards, picked up my Suzuki, and attempted to start the engine. We had no electric starters on those old dirt bikes; we used a kick-starter instead. You guessed it. It would not start.

Rather than continue the manual attempts in shame (and with great pain), I placed the bike in neutral, got a running start, hopped back on, and coasted down the street until I could start the bike by catching it in gear. Unfortunately, it was more than an entire block later before the engine finally kicked in.

I guess you could say that I quietly rode off into the sunset.

I eventually learned to pull off a good wheelie on that cycle and keep the front wheel off the ground for quite some distance. Funny, but I never did learn why a young man would behave like I did in the aftermath of a mutual break-up.   And that mystery continues to this day. 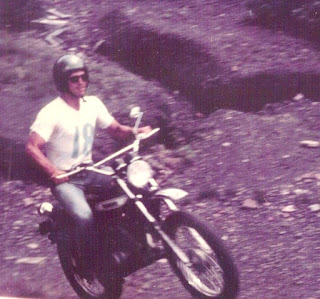 Author's Notes: The above photo was taken in the coal hills of Cambria County by Doc Rich Fornadel.  *There were two green-eyed riders on that green bike that day of the wheelie, both sharing one green helmet. ** My rolling in neutral on that bike (to catch it in gear) took me past two churches in town, St. Joseph's and St. Agnes' - years later I realized that was as close as I've ever come to being a holy roller.