Some stories are better left untold, and what follows just might be one of them.  But if you enjoy its content, then it’s worth retelling and worth your time in reading this saga. Besides, the statute of limitations has run out long ago.

To my best calculations, the school year was 1981-82, my eighth year of teaching, and the student involved was seventh grader Scott Bassler, who still lives locally.   Don’t worry; Scott gave me permission for including his name in this legendary tale. 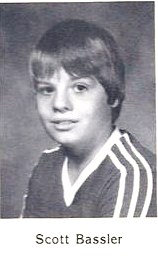 To say Scott was talkative would be the most understated utterance history has ever heard.  He wasn’t a bad kid – he just had trouble controlling his tendency to talk (to everyone, about everything, and at every available moment).

After repeated warnings and reprimands that lasted for months, I finally had my fill of his interruptions during class one day.  Habitually, I tried not sending students to the office unless it was for some major infraction.  I also tried not sending them into the hall where I knew they would only attract the attention of other students who might happen to walk by.  That would be more of a reward than a noteworthy form of punishment.

So, without doing a whole lot of thinking in advance, and being at wit’s end, I calmly walked to the back of the room. Without saying a word, I proceeded to grab hold of Scott’s desk and chair, (with him still sitting in it) and drag all three into the storage room behind my classroom wall.

That storage room was primarily used for the chemicals that were shared by the science department.  Yes, chemicals, some of which were toxic and were removed by mandated state and federal laws years later.  Thank goodness the containers were all closed and sealed.

This storage room was also shared by fellow teacher Gary Greenland, who taught science and physics in the classroom nearby.  And the time of day, (the importance of which you will note later in this narrative), was between 9:45 and 10:00 in the morning.
I have to admit, the plan worked to perfection. My class responded well to the departure of the boy and the lack of his interruptions.  We got a lot accomplished and the lesson went more smoothly than most others I experienced with that particular class.

I was actually wondering by the end of the period, why I hadn’t come up with this discipline technique earlier in my career.  I also couldn’t wait to use it again should the need arise.

But, I had totally forgotten that Mr. Greenland was using this room for more than just storage.  He had placed a large, opened vat of fermenting liquid cow manure in the very same storage area.  He intended to use it on his tomato plants which were growing on the window sill in the same room.  Anyone from a rural area knows full well what odors were present in that room.

Mr. Greenland happened to walk into that storage room to check on his manure batch, which was gurgling nicely in the vat and producing all sorts of methane gas. He asked Scott what he was doing back there.  Scott told him the truth and informed him that he was being punished for disrupting class yet again.

To this day, I’m not sure if Mr. Greenland believed Scott or if he was more worried about the flushed look on the kid’s face when he noticed him in that storage room.  In any event, he continued through the door into my classroom and asked me about Scott’s presence in the storage room.

“Did you put that kid in the storage room?” he whispered during my study hall.  He also reminded me of the liquid manure he placed nearby.

I could not muster one word of response.  Glancing at my watch I realized it was three o’clock in the afternoon and about 10 minutes before dismissal time.  I could only slap myself on the forehead, and like Scott, I’m sure I gasped for air.

Yes, the poor kid missed all his classes that day, his lavatory breaks and his lunch, because I had totally forgotten about him, and left him in that raunchy mix of toxicity and foul aroma.

As I sprinted back to the storage room and opened the door, Scott greeted me with, “Can I please leave now?  I really have to use the lav.”

Giving no indication that I had just made a huge blunder with the boy, I replied, “Yes, young man.  But have you learned your lesson?”

I didn’t need to hear his response.  His face spoke a thousand words.  I could only hope he stayed conscious and didn’t pass out.

I had to inform the office that the boy was detained by me so he wasn’t marked absent from his classes that day.  To my amazement, I heard no repercussions from the administration or Scott’s parents.  The same scenario today would no doubt bring on some severe consequences.

Today, I can honestly say that I’m not sure whether Scott was his old self the next day in class, or if he contained his desire to constantly chit chat.  Obviously, I had more important worries on my mind, like losing my job.  One thing is certain - I never used that form of discipline on any other student, ever again.

A big thank you goes out to Scott, for being such a great sport all these years.  I have to wonder though, if he ever got into gardening and tried using liquid cow manure to fertilize his crops.