“Do I look like Victor Vacation?” That is the big question that I’ve asked my wife a hundred times, regardless of the season, climate, or our vacation location. It has popped up on every trip we’ve taken to Ocean City, Maryland and the East Coast, to San Francisco, California and the West Coast, and everywhere in between.

You have all seen Victor Vacation or one of his many relatives before, especially when you travel. He stands out more than a white-hooded KKK member attending Mass at the Vatican.

His attire usually involves a nice dress shirt, casual cargo shorts (with at least 14 pockets), and some kind of open-toe sandals or flip-flops. At times he sports some out-of-date sunglasses, and he might wear a cap or visor, too. However, the dead giveaway to identifying him as Victor Vacation are his black dress socks, worn to a height of just below the knee, with the toes of the socks stretched to the breaking point within the sandals.

If his socks become too stretched at the toe, he’s likely to just wear his dress shoes instead. 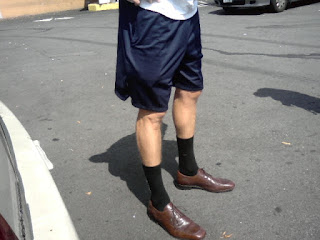 Above: Mr. Vacation with the "dress sock" look.

Mr. Style for a while

Constantly conscious of style through my entire teaching career, I never wanted to look like him. But now that I’m retired, I’m amazed at how I’ve changed regarding style.

After returning home from a church service on a Sunday a number of years ago, I changed from my dress pants into a pair of baggy but comfortable shorts. I didn’t change the shirt, nor did I take off my black dress socks. I was ready for an afternoon of relaxation. Then the doorbell rang.

I immediately ran to the door, as the others in the house usually scattered when they realized that an unannounced visitor was on our front porch. I accepted some religious brochure from the visitor and wished him well, and I turned back to head into the living room. It was then, that I looked down at my attire just as my wife asked, “Do you realize how you are dressed?”

I replied, “Yes, I do, but I no longer care.” To that, my daughter proclaimed, “Maybe you should, Dad, maybe you should.” That’s when it hit me… this once-stylish, color-matching professional had transformed into Victor Vacation; and what was even more remarkable, I had no regrets about it, either.

During the same time period (estimating it was in the 2000 to 2003 era), I stopped for a fill-up at a local CoGo’s gas station. I was returning home from mowing the grass and doing some maintenance at a small cabin I owned along Yellow Creek.

I was wearing old work clothes, and went in to pay the attendant (Samantha Faron, a former student) before I pumped the gasoline. I noticed her undeniable smile as I talked to her. She was focused on my jeans, and as she questioned the apparent age of the slacks, her smile gradually turned into a giggle.

“Quite the stylish jeans, Mr. Potchak,” she stated.

When I asked her to explain, she reminded me that the jeans were black in color, stonewashed, and had pleats, all of which had been in style a number of years prior. Her comments made me roar out loud. I informed Sam that my wife had also commented on my attire before I left the house. Once again, I didn’t care. But maybe I should have. In any event, I was sadly becoming quite oblivious to my out-of-style appearance.

Matching jeans and a sweatshirt

A few years ago, when my daughter and son-in-law visited, they couldn’t help but remark sarcastically about the pale-colored blue jeans I was sporting or the over 30-year-old sweatshirt I matched with the jeans. The jeans were not worn or washed to a new light shade of blue. That was their original color.

Again, I laughed but really didn’t care. I was becoming comfortable in my own skin, so to speak, but even more comfy in my own old styles. I still have the sweatshirt and pants and wear them occasionally, but only around the house. My wife forbids me to put them on and be seen in public.

Styles go round and round

Shortly after the Top Gun movie hit the theaters in May of 1986, my wife purchased a very nice pair of aviator sunglasses for me for Father’s Day. I wore those Tom Cruise “Maverick” specs everywhere I went. With my ball cap brim curved downward like a horseshoe, I was Mr. Cool, fitting right in with the fashion crowd. Heck, brimming with confidence, I expected Kelly McGillis to call me sometime and perhaps treat me to dinner and a drink. 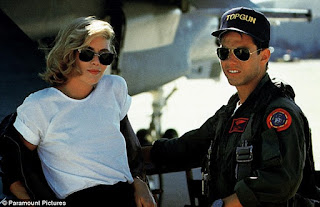 Above: The aviator specs in Top Gun.


Time flew by, and when I sported those same sunglasses two summers ago, my daughter and son-in-law remarked again, “Nice sunglasses, Dad.”

I immediately took it as a sarcastic comment from them, as those specs were 30 years old to the day. But this time they were trying to give me a compliment. Apparently, unbeknownst to Victor Vacation, the style had returned and I was once again a part of the in-crowd.

They knew fully well that they were not new sunglasses. I didn’t need to elaborate that the aviators were the very same set purchased 30 years earlier. I was just proud that I kept them that long and that they were still in semi-good condition.

Well, under closer inspection, the frames of the glasses do show some wear and the lenses are scratched and marked, but that doesn’t matter. In fact, I proudly admit that I still have all the items mentioned in this story, and I’m not about to toss them away anytime soon. But, as my daughter Kelly said 15 years ago, maybe I should – yes, maybe I should.

In the meantime, I’m pleased to report that I am still constantly staying in style. And I intend to legally change my name this summer to Victor Vacation.